Streaking at the big games

I’m not a huge rugby league fanatic but like the other 2 Million plus viewers I stayed up past 8pm to watch the 3rd State of Origin match between the Blues and the Maroons last night. 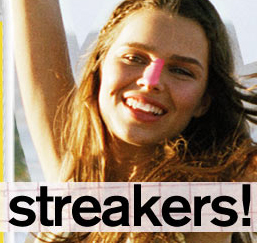 Even if you didn’t watch the match, you will know by now that Queensland ran in for a try as a streaker was being man-handled by security staff in the dying minutes of the game. That gave Queensland another set of six tackles and deprived the Blues, according to sports commentators, the chance to head down the other end to score.

Apparently the same said streaker has some form. During the finals two years ago he stormed on to Allianz Stadium during the sudden-death clash between the Wests Tigers and New Zealand. It’s even rumored that the stunt was the result of a Facebook challenge, which attracted thousands of amused people willing to chip in to pay the fine.

Footy aside, and if for a minute we set aside the notion streakers are usually encouraged by some amount of alcohol, a bet, a challenge or a dare, peer pressure, perhaps even breaking a taboo - why would anyone want to run through a packed stadium stark naked?

Well opinion in the 70's insisted that streaking was not exhibitionism.  An article in the British Medical Journal asserted, "streaking is the antithesis of flashing.  And there is no lingering to see the... look of dawning interest that the flasher so vainly hopes his victim will show."

Running naked to gain some attention is however a form of egotistically showing oneself off and isn’t exhibitionism sexual in some way.  According to Freud, it's an infantile form of sexual pleasure.  You're being looked at and you're being given attention.  From the moment we're born we have a love of looking… a sexual curiosity, and streaking satisfies that in a way.

Posted by Jack Dikian online at 2:42 AM