I came across an ability test in one of the weekend papers today; it was actually a sample general ability and mathematics test paper, which I thought I’d try and answer. The back-story is about students spending large amounts of time and money in private tutoring as they prepare for exams. 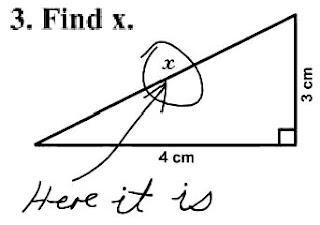 The ability-test which, it is said, is able to differentiate accurately between students of very high ability. It’s supposed to be rare for any candidate to score full marks in any of its components.

So back to the sample general ability test… and I should say I haven’t sat for an exam for at least 10 years. But the things that bugged me about exams back then look as if haven’t gone away. I thought, perhaps I might of grown out of it.  I’m talking about how some exam questions can come across in a confusing manner – I’d end up wasting valuable time reading and re-reading the question, attempting to makes sense of the examiner’s intention.

Here is question one:

If the words below were rearranged to form the best sentence, which word would come last?

chances want take any they to not did

However, what does “best” really mean? Secondly, the question is asking us to rearrange the words – not the option to discard words. Yet, it seems the word “to” can be discarded. A more accurate answer would be:

“They did not take any chances to” however, that answer is not an available option.
Posted by Jack Dikian online at 8:10 PM No comments:


I have been sitting in the Neurosequential Model of Therapeutics case‐based training series led by Dr. Bruce Perry and hosted by The ChildTrauma Academy. The aims to aid practitioners better understand the neurodevelopmental principles involved in primary symptoms as seen in the children they serve.  This has been an immensely valuable teaching when working with and examining long-term effects of trauma in children, adolescents, and adults as well as describing how traumatic events in childhood change the biology of the brain. 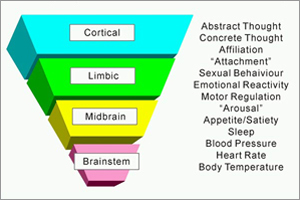 For those not familiar with this, the Neurosequential Model of Therapeutics is an approach to clinical work that is informed by neuroscience. The primary assumption is that the human brain is the organ that mediates all emotional, behavioral, social, motor, and neuro-physiological functioning.
Three central elements of the model:


The goal of this approach is to structure assessment of the child, the articulation of the primary problems, identification of key strengths and the application of interventions (educational, enrichment and therapeutic) in a way that will help family, educators, therapists and related professionals best meet the needs of the child.

Posted by Jack Dikian online at 1:15 AM No comments:

Over the weekend I started watching HBO’s Sopranos again with one of my favorite episodes Season 1, Number 5 College demonstrates more than any the idea of psychological splitting. 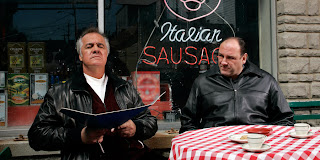 Psychoanalytic tradition that suggests that a horizontal splitting represents repression, and the vertical can be considered as a representation of denial.

A horizontal splitting, the barrier of repression, separates unconscious material from preconscious contents, while a vertical splitting basically partitions material that is more or less accessible to consciousness. While many are familiar with Sigmund Freud's ideas about repression and the forces that maintain it, the idea of vertical splitting is rather less well known.

Heinz Kohut (1971) characterizes vertical splitting by the existence, side by side, of attitudes operating on different levels — different structures of goals, aims, and moral and aesthetic values.

College sees Tony drive his daughter, Meadow, to Maine to look at schools that interest her. After her interview at Bates College Tony runs into a former colleague who ratted out members of his mob family and was given a new identity under the Federal Witness Protection Program.

Leaving Meadow to hang out with undergraduate girls she meets at a bar at Colby College, Tony tails his enemy home to assure himself he's got the right man. Despite the fact that his adversary has a wife and a young daughter and has been out of Tony's life for twelve years, Tony has no qualms about killing him.

In his recent book The Psychology of the Sopranos, Glen Gabbard discusses Tony Soprano in terms of Kohut's idea of the "vertical split" pointing out that Tony is that maintaining the vertical split is necessary for Tony to function effectively within his contradictory worlds so that the competing elements of his personality remain unintegrated rather than exposing him to "conflict, anxiety and psychic pain.

Posted by Jack Dikian online at 12:04 AM No comments:

A new colleague, the Law of Jante and Volvo cars

Not sure how a brief chat with a work colleague today ended up in us talking about modeling (I’m certainly no candidate) and then about a fascinating law of Jante. She was basically telling me how in her home land of Denmark people would not necessarily embrace the success of a super-model. The more I thought about that the more I thought "how limiting" and might this effect a nation, indeed nations. Could this, for example, explain that car (Volvo) no one wants to drive behind - although that's becoming a thing of the past. 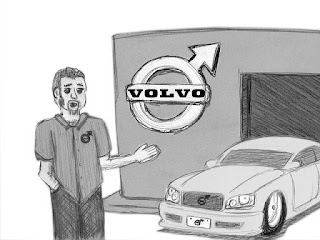 Wikipedia tells us that the Law of Jante is used colloquially as a sociological term to negatively describe an attitude towards individuality and success common in Sweden and Scandinavia the term refers to a mentality which de-emphasizes individual effort and places all emphasis on the collective, while discouraging those who stand out as achievers.

In essence this denies the individual the belief that he or she has any self-worth. It creates an illusion about the collective: The illusion serves to isolate the individual and make him or her feel lonely, worthless or ostracized by the community. A strict way of life, of extreme humbleness and so present in everyday life.

This, it turns out, is a concept created by the Danish author Aksel Sandemose, who in his novel A fugitive crosses his tracks identified the Law of Jante as ten rules. Here are the ten rules:

So this seriously interesting and touches on the notion of how cultures make people conform. For example, the Japanese have a saying, “The nail that sticks up gets hammered down.” That is, act like other people, don’t show off, or else. These forms of social pressure are particularly pronounced in hierarchical cultures, as in East Asia, where people are supposed to know their place, and in small towns, where everyone interacts regularly with everyone else.

It’s interesting to note that Sandemose's novel portrays the small Danish town Jante, that was modeled upon his native town Nykøbing Mors. I’m guessing Danes (and all of us really) have a protracted period of learning the ways of the world, and we internalize social norms and folk beliefs, before it occurs to us to ask the critical question of why are following a particular cultural practice. This is why it is said that, “You can’t choose your culture. Your culture chooses you.”

So what's it really all about? Is it an effort of over protectiveness; not wanting anyone to loose, fall outside of a particular society. Or is it more about being afraid to see others win.  Some will say, the Law of Jante has  to a very large extent prohibited development.

If one asks a Swede what is the most prevalent characteristic of their society, they would probably say, "We are envious of our neighbors good fortune." The Swedish Institute of Public Opinion Research found that in a poll conducted of which traits Swedes identify themselves mostly with, "Envious" was at the top of the list with 49% of the respondents. What is behind the prevalence of envy in this prosperous, industrialized, yet intensely jealous nation? Below is Google's search volume index for The Law of Jante, clearly people are searching for answers.

It seems the Law of Jante isn’t merely a set of laws, it is the very core of the speech of the people, and all that they say can be argued to go back to the Law of Jante.  Envy, despite being a Christian sin, is a principle part of Jante's law, as the result of breaking this social code means that your neighbors will despise you for your individuality, uniqueness, or an excess show of wealth. In fact, one could venture to say that in these societies, breaking Jante's law is in and of itself much worse than committing the sin of envy. And so now to Volvo.

Premium-brand buyers outside Scandinavia love a bit of bling in their motoring diet. They want to lord it over their neighbours in ways that would breach every one of the Jante laws. And yet there remains a market for discretion, particularly in the current climate. These days there’s an air of recessionary restraint that might just blow some opportunities Volvo’s way. Out of adversity comes opportunity, and so forth.

Posted by Jack Dikian online at 2:15 AM No comments: