The Fleshy Part of the Thigh - the God Particle

I’ve always thought the sixty-ninth episode of the HBO series, The Sopranos - The Fleshy Part of the Thigh to be one of the deepest and most confronting of the many excellent episodes in the series. I had the chance to watch it again last night. 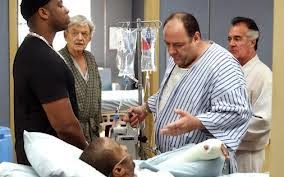 Tony, in hospital faces his own mortality after being shot by his demented uncle. In the next room, Da Lux, a rapper who was shot while leaving a club is being comforted by his manager and family. We over hear his manager telling his client that getting shot will boost record sales. Da Lux is clearly distressed and in pain.

This episode also has one of my favorite quotes scribbled on a card.   While having his wound dressed the day before surgery, Tony speculates that Janice is responsible for the card - the Ojibwe saying "Sometimes I go about in pity for myself, and all the while, a great wind carries me across the sky,"

After learning that Pastor Bob and his followers oppose female contraception, Tony asks them if their God disapproves of Viagra too. Da Lux invites Tony to watch a boxing fight at his hospital room on satellite TV. While watching the prize fight, Paulie moans about how alone everyone is, Schwinn discusses the interconnectivity of all life, telling them how no event or entity can be understood independent from the rest of the world referencing the work of Erwin Schrödinger, Quantum mysticism, and Da Lux agrees with Schwinn: "everything is everything, I'm down with that."

Schwinn has ideas that are at odds with the beliefs of Pastor Bob, who again visits Tony later and tries to encourage him to find his spirituality. Tony confides to Schwinn he is starting to believe they are all part of something bigger.

Schwinn’s interconnectivity remark - What sounds like a casual remark is of course anything but. It’s the genius of the writers that set up and make room for reflection. Here, mortality, psychology, religion, quantum physics, art and moralism collide.

Interconnectivity, or as Tony puts it “we are all part of something bigger” isn’t, of course, a new idea. Our perception of things, the world is not just an esoteric topic confined to philosophy, but one of neuropsychology, brain structure and function, physics and more. Consciousness, as imperceptible and inexplicable as it may be, could well be at the root of everything we experience. Not just what we think, but what we see, what we feel.

So where, or how does the discovery of an elementary particle such as the Higgs boson sit? The Higgs boson, or the “God particle” explains how elementary particles gain mass by interacting with other particles within an invisible field of energy. Sure, the 2013 Nobel prize went to Francois Englert of Belgium and Peter Higgs of the United Kingdom for the theory of how particles acquire mass. This was borne out when researchers confirmed the existence in 2012 of the God particle.

But, Where did the thought of the Higgs boson come from? Does this particle exist only in our mind? Can it be manipulated by our thoughts? Is it possible that matter isn’t so much a thing as it is a perspective? If so, could it be that by changing this perspective we might discover that our essential nature isn’t matter-based after all?

Posted by Jack Dikian online at 2:48 AM No comments:

The Psychology of Waiting Lines

Years ago Fedex ran a series of advertisements in which they noted; “Waiting is frustrating, demoralizing, agonizing, aggravating, annoying, time consuming and incredibly expensive.”  Much has been written in relation to the psychology, dynamics and science of waiting. The truth of this assertion can't be denied.  Few of us haven’t felt these emotions at one time or another. And many of us would have seen the collapse of queues in various forms and places. I recently watched this disorder (mob behaviour) arising suddenly from a perfectly ordered (behaved) queue outside a Sydney Apple store. I shall say more on this in a minute. 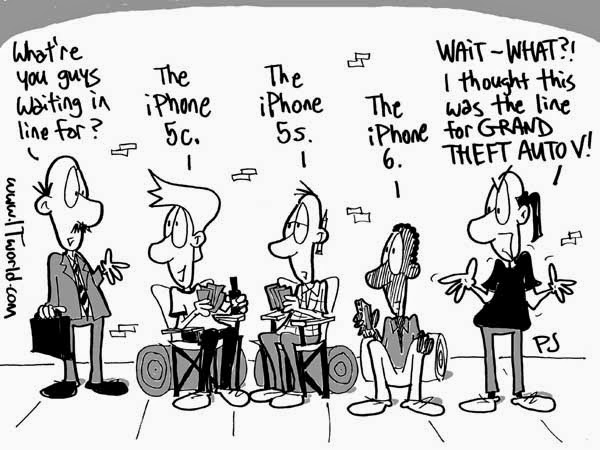 It’s understandable that in some, perhaps many  waiting situations there is no visible order to the waiting line. Waiting for a train on a busy platform comes to mind. Shopping for sales on Boxing day is another. Here the level of anxiety can be quite high and the group waiting resemble less a queue and more a mass of humanity. Instead of being able to relax, each individual remains in a state of nervousness about whether their priority in the line is being preserved. But what about an orderly queue? The assumption here is that a first in, first out (FIFO) system prevails.  Sasser, Olsen and Wycoff (1979) showed that one of the most frequent irritants mentioned by customers at restaurants is the prior seating of those who have arrived later.

And, in 1982 social scientists James Wilson and George Kelling described the broken windows theory. Consider a building with a few broken windows. If the windows are not repaired, the tendency is for vandals to break a few more windows. Eventually, they may even break into the building, and if it's unoccupied, perhaps become squatters. I’m not suggesting here that an orderly queue of people waiting optimistically for their new shiny gadget would over time track the theory of broken windows. However I am proposing that the smallest of triggers, perceived or otherwise, can drive a well-ordered queue that’s been maintained for many countless hours if not days to collapse rapidly and violently - the scene, as it turned out outside that Apple store in the very early hours of the morning.

In 1985 David Maister provided some insight in the psychology of waiting lines.  He proposed the following:

So what turned people, mostly adults, who were otherwise waiting their turn patiently and enthusiastically into a mob of lawless, aggressive queue jumpers requiring the intervention of a significant number of police officers that threatened delaying the opening of store?

For starters, you could argue that there was an element of that “uncertain wait.” Rumours were spreading, as they do, up and down the large queue that the said shiny gadget was in short supply and therefore many will miss out. Also, the idea that “unfair waits are longer than equitable waits” was beginning to take hold. People were reserving places in the queue for their family and others.  Many in the queue were complaining that the queue in front of them was getting progressively longer than behind them. And, now that I’m thinking about it… was the product of such perceived value that it justified the multi-day wait? Perhaps so… but only until the next new new thing!
Posted by Jack Dikian online at 9:28 PM 1 comment: