I woke up today with a thought asking myself what if mankind never invented the mirror. Besides the countless number of hours we spend in front of a mirror; dressing up, doing the hair, applying makeup and/or just admiring ourselves. 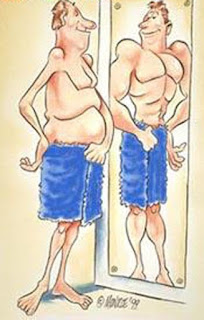 What would be the psychological or emotional impact upon us humans when we’ve never seen ourselves? I guess I’m getting at self-psychology. Of course from a physical standpoint we might look untidy, our hair out of place, the pimples on our face less of a concern, our yellowing teeth outside our consciences.

We, after all, judge others based in part on how they look. We in many subtle ways compare other’s with our own sense of ourselves. And, we would still compare people amongst themselves. For example I mightn’t compare Tom Cruise with my self but I can compare him with someone else.

When Erik Erikson talked about identity it of course much more than simply how we look. Erikson’s framework rests upon a distinction among the psychological sense of continuity or the “self”, the personal idiosyncrasies that separate one person from the next, and the collection of social roles that a person might play i.e the social identity.

Erikson's work, in the psychodynamic tradition, aimed to investigate the process of identity formation across a lifespan. Progressive strength in the self-identity, for example, can be charted in terms of a series of stages in which identity is formed in response to increasingly sophisticated challenges. Now I’m not for a minute suggesting that one’s image in the mirror is the sole source of identity formation – more so asking what part it plays if any.

Posted by Jack Dikian online at 9:29 PM No comments:

The Increase Of Psychology-Related Professions


While salaries can vary, the U.S. Bureau of Labour Statistics predicts a faster than average growth for psychologists. Job opportunities will be the most plentiful for those with doctoral degrees in applied specialty areas such as Counselling or Health Psychology.

School psychology is also cited as an area that will experience strong growth in the coming years as awareness of the mental health needs of children increases. As issues such as behaviour problems, bullying and learning disorders become more prominent, the demand for qualified school psychologists will go up.


The following psychology-related professions have a strong projected job outlook.

Posted by Jack Dikian online at 12:39 AM No comments: