Deja Vu - Uncanny feeling of being here before 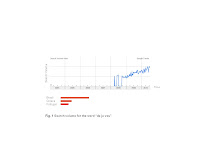 Jack Dikian
2004
Introduction
Recently I happened to type the word “deja vu” into Google’s trends tool and was surprised to see that in 2008 there was a number of spikes – that is the search volume index jumped greatly, and more so, that since 2008, the search volume index for this word grew. The other interesting thing about this trend seems, at least on first glance, to be mainly emanating from Brazil, Greece, and Portugal (see Fig. 1)

I, like many others, have experienced more than once the uncanny feeling or illusion of having already seen or experienced something that is being experienced for the first time. And, again similar to those who report to have experienced this, it leaves people puzzled, disoriented and searching for explanations.

The term deja vu is French and means, literally, "already seen." Those who have experienced the feeling describe it as an overwhelming sense of familiarity with something that shouldn't be familiar at all. Say, for example, you are traveling to England for the first time. You are touring a cathedral, and suddenly it seems as if you have been in that very spot before. Or maybe you are having dinner with a group of friends, discussing some current topic, and you get the feeling that you've already experienced this very thing - same friends, same dinner, same topic.

The experience of déjà vu is usually accompanied by a compelling sense of familiarity, and also a sense of "eeriness," "strangeness," "weirdness," or what Sigmund Freud calls "the uncanny." The "previous" experience is most frequently attributed to a dream, although in some cases there is a firm sense that the experience has genuinely happened in the past.

As much as 70 percent of the population reports having experienced some form of deja vu. A higher number of incidents occur in people 15 to 25 years old than in any other age group. Deja vu has been firmly associated with temporal-lobe epilepsy. Reportedly, deja vu can occur just prior to a temporal-lobe seizure. People suffering a seizure of this kind can experience deja vu during the actual seizure activity or in the moments between convulsions. However, deja vu occurs in individuals with and without a medical condition, there is much speculation as to how and why this phenomenon happens.

Some practitioners attribute de ja vu to simple fantasy or wish fulfillment, while some psychiatrists ascribe it to a mismatch in the brain causing the brain to mistake the present for the past. Others from the world of the para-sciences believe, amongst other things that it is related to a past-life experience. The frequency of the experience has left specialists searching for explanations. There is an evident absence of rationale, as expressed through varying opinions from psychologists, neurobiologists and even spiritual healers.

Links with a number of disorders and / or other factors

Early researchers tried to establish a link between déjà vu and serious psychopathology such as schizophrenia, anxiety, and dissociative identity disorder, hoping for some diagnostic value. However, there does not seem to be any special association between déjà vu and schizophrenia or other psychiatric conditions such as depersonalization(1). The strongest pathological association of déjà vu is with temporal lobe epilepsy leading some researchers to speculate that the experience of déjà vu is possibly a neurological anomaly.

As most people suffer a mild (non-pathological) epileptic episode regularly such as a hypnagogic jerk - it is conjectured that a similar minor neurological aberration occurs in the experience of déjà vu, resulting in an erroneous sensation of memory.

There have been reports that certain pharmaceutical drugs increase the chances of déjà vu occurring in the user.

A neurobiological explanation involves brain grid and place cells as described by the work of Neuroscientist Edvard I. Moser of the Norwegian University of Science and Technology. When the brain is keeping track of an environment, Place cells (neurons) are involved in the processing of this by [mapping] place cells to specific locations in an environment and fire when you pass through that location.

Grid cells on the other hand work in a network to produce a kind of internal coordinate system, noting information about distance and direction. These neurons do not correspond to a specific location but become active across several regularly spaced points in any setting.

Grid cells are located in the entorhinal cortex, a brain region that processes information before sending it to the hippocampus, the area where place cells are located. Because place cells have a unique firing pattern for nearly every experience, it is likely that the hippocampus, and not primarily the entorhinal cortex, decides whether a location is novel or being revisited. When a strange place is experienced as familiar, it may be because the activated ensemble of place cells at that location happens to be similar to a pattern of activity that was elicited by a previous locale.

What is going on in Brazil, Greece, and Portugal and why have they become so interested in this phenomena?

(2) Neuroscientist Edvard I. Moser of the Norwegian University of Science
Posted by Jack Dikian online at 12:13 AM No comments: