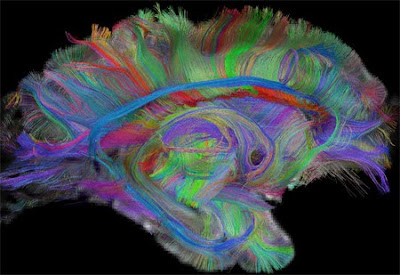 Flipping through a pile of brain scans, a neurologist or psychiatrist would be hard pressed to pick out the one that belonged to a schizophrenic. Although schizophrenics suffer from profound mental problems -- hallucinated conversations and imagined conspiracies are the best known -- their brains look more or less normal.

Whilst earlier Magnetic Resonance Imaging (MRI) hint of slight brain structure anomalies, it is nevertheless difficult to explain how these lead to the symptoms observed in schizophrenia and other psychiatric disorders.

Using Diffusion Tensor Imaging (see image), for example, memory and cognitive problems associated with schizophrenia are (in some cases) seen to be linked to flaws in nerve fibers near the hippocampus, a brain area crucial for learning and memory. If such diseases are rooted in subtle "wiring" problems involving axons, DTI can be used to look at complex network of nerve fibers connecting different brain areas.

DTI tracks the movement of water molecules in the brain. In most brain tissue, water molecules diffuse in all different directions. But they tend to diffuse along the length of axons, whose coating of white, fatty myelin holds them in. Pictures can be created of axons by analyzing the direction of water diffusion.

Neuroscientists are using DTI to study a host of disorders, including addiction, epilepsy, traumatic brain injury, and various neurodegenerative diseases. For instance, DTI studies have shown that chronic alcoholism degrades the white-matter connections in the brain, which may explain the cognitive problems seen in heavy drinkers.

Posted by Jack Dikian online at 4:22 AM No comments: