A few days ago while chatting with a friend about animal behaviors - the thought occurred to me whether animals can behave in ways that resemble gambling as we know it.

Personality, certain predispositions, neural and neuro-chemical basis for gambling (and even that gambling is a form of deviant behavior) has been postulated as has a range of psychoanalytical theories. Pathological gambling is characterized by persistent, maladaptive gambling behavior, which disrupts personal and professional life.

On the other hand, some even (perhaps unreasonably) rationalize that gaming is no different to those many that undertake risky behaviors as part and parcel of their professional occupation - Making speculations about the economy, and in taking calculated risks with investments and so on.

In wondering about the propensity of gambling behaviors in animals, the deeply seated psychological perspectives such as those that suggest "true" gamblers want to lose all their money so that they can reach a state of nothingness and despair –That is they have a desire to actually lose their money, so as to be punished for unresolved tensions and internal conflicts in their lives.

So could perhaps neural and neuro-chemical basis for gambling be modelled by animals. It turns out that rats have been used to undertake experiments in gambling scenarios.

In one experiment Rats choose among four different options to earn as many sugar pellets as possible within a period of time. Each option is associated with the delivery of a different amount of reward, but also with a different probability and duration of punishing time-out periods during which reward cannot be earned.

The schedules are designed such that persistent choice of options linked with larger rewards result in fewer pellets earned per unit time. Rats learn to avoid these risky options to maximize their earnings, comparable with the optimal strategy.

In this case, the levels of Serotonergic and Dopaminergic agents was showen to impair and/or improve gambling performance in Rats.

Posted by Jack Dikian online at 6:50 PM No comments: 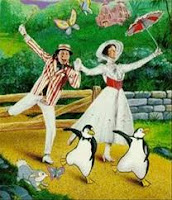 With all that has been unfolding in my personal life, the highs, and bitter disappointments, I wanted to try and focus on happier days - times gone by. One of those times was when I first read Mary Poppins, and then again, years later when I saw the movie. As the story goes -

After Mary Poppins wins a horse race, flush with her victory, she is immediately surrounded by reporters who pepper her with leading questions and they comment that she probably is at a loss for words. Mary disagrees, suggesting that at least one word is appropriate for the situation - Supercalifragilisticexpialidocious, and begins the song.

Mary Poppins says about Supercalifragilisticexpialidocious, who cares what it sounds like? And who cares if it's a real word? Supercalifragilisticexpialidocious is a nonsense word that describes exactly how it feels: fantastic! Mary Poppins uses it to express her effortless win at the cartoon derby. Mr. Banks uses it when he feels the freedom to walk away from a dead-end job. The children sing it while they march around the house.

The origin of the word - super- "above", cali- "beauty", fragilistic- "delicate", expiali- "to atone", and docious- "educable", with the sum of these parts signifying roughly atoning for educability through delicate beauty.

Mary Poppins Principle - is about making life a game.

That staightlaced nanny who was "practically perfect in every way" certainly had a way of injecting fun into people's lives! From going to the bank to connecting new friends to the cartoon derby, Mary Poppins embodies the concepts of freedom through discipline and discipline through fun.

Much like Mary Poppins, just after she made herself hired and went to the children's nursery, she decided that they should tidy up the room? The children were upset and she said that they would make a game of the activity.

"This is a game, isn't it, Mary Poppins?" was Jane's concerned question, in which she replied that you have to have an element of fun in everything you do. As a consequence, the activity, instead of being perceived as an ordeal or a chore, is then perceived as a collaborative game; it becomes enjoyable.

Games are the one essential in life which we should strive to maintain, no matter how old we are and no matter how worn out we might be. I am not talking about sports, here, though some possess a "game" quality. I am talking about the act of having fun while doing certain activities.

Posted by Jack Dikian online at 1:26 AM No comments:

Alice in Wonderland Syndrome - Do You Look Fat? 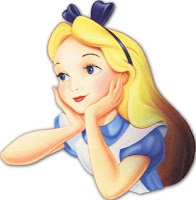 Alice in Wonderland Syndrome (AIWS) is named after Lewis Carroll’s novel Through the Looking Glass. In one scene, Alice eats cookies that change the size of her body, causing her to alternately be too small and too large for her environment.

Alice in Wonderland Syndrome (This condition is also known as micropsia and macropsia) describes a set of symptoms, the most common of which are:

Most reports are from children or by people later in life who experience the Alice in Wonderland symptoms and these are often at night.

The syndrome was first described in 1955 by the English psychiatrist John Todd. Todd named it, of course, for Alice's Adventures in Wonderland by Lewis Carroll. Because the syndrome is usually associated with visual hallucinations and (usually) patients with either family members with a history of migraine headaches or themselves suffering migraines. It’s not a coincidence, therefore, to know that Lewis Carroll also suffered from severe migraine.

A psychopathological syndrome of distorted space, time and body image. The patient has a feeling that the entire body or parts of it have been altered in shape and size (metamorphosis), associated with visual hallucinations.

Alice in Wonderland syndrome is a disorienting neurological condition which affects perception. Sufferers may experience micropsia, macropsia, and/or size distortion of other sensory modalities. A temporary condition, it is often associated with migraines, brain tumors, and the use of psychoactive drugs. It can also present as the initial sign of the Epstein-Barr Virus (See mononucleosis).

Psychoanalytic interpretation by Todd has made more understandable and plausible the illusionary dreams, feeling of levitation, and alteration in the sense of passage of time that Alice experienced. Alice trod the paths and byways of a wonderland well known to Carroll, her creator, who suffered severely from migraine.

In Lippman’s report, one of the patients stated that she felt short and wide as she walked, calling this a ”tweedlike dum” or ”tweedle dee” feeling. Associated disorders may include apraxia, agnosia, language disorders, feelings of déjà vu or jamais vu, dreamlike or trancelike states, and delirium.

Similarly, The Cheshire Cat syndrome is another medical eponym taken from Alice in Wonderland. It was first described by the British physician Eric George Lapthorne Bywaters (born 1910) in 1968.

We tend to use cross-sensory metaphors in our everyday language quite frequently. For example, she’s a prickly person, or he’s wearing a loud shirt. But what we may not be aware of is that some people, some estimate up to 5% of the population may suffer from neurological (clinical) synesthesia.

In one of the most common forms of synesthesia, individuals will perceive letters of the alphabet and numbers with a shaded or tinged color. While different individuals usually do not report the same colors for all letters and numbers, studies with large numbers of synesthetes find some commonalities across letters such as the letter” A” is likely to be colored red.

Another example of synesthesia is where individuals report that some sounds trigger colour, shape and motion. For example, a barking dog may trigger color and simple shapes that arise, move around, and then fade.

Posted by Jack Dikian online at 1:06 AM No comments: 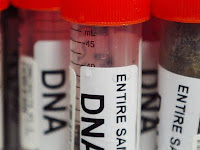 Can people's tendency toward infidelity, uncommitted one-night stands, alcoholism, gambling, some destructive behaviors, thrill-seeking and even political liberalism be explained by genetics?

According to a new study by Researchers at Binghamton University, State University of New York, a dopamine receptor gene, DRD4 is linked to people's tendency toward both infidelity and uncommitted one-night stands

The same gene has already been linked to alcoholism and gambling addiction, as well as less destructive thrills like a love of horror films.

Justin Garcia, a postdoctoral fellow at Binghamton University, State University of New York, Using a detailed history of sexual behavior and relationships from 181 young adults researchers found that individuals with a certain variant of the DRD4 gene were more likely to have a history of uncommitted sex, including one-night stands and acts of infidelity.

The motivation seems to stem from a system of pleasure and reward, which is where the release of dopamine comes in," Garcia said. "In cases of uncommitted sex, the risks are high, the rewards substantial and the motivation variable — all elements that ensure a dopamine 'rush.'"

A recent Israeli study has also found a connection between sex drive and the DRD4 gene. In the study 148 male and female students, researchers from the Hebrew University and the University of the Negev, found that around 30 per cent of those studied carried a variation of the DRD4 gene that also correlates with stronger sex drive.

According to researchers at University of California at San Diego (UCSD) and Harvard University, "ideology is affected not just by social factors, but also by DRD4."

The study was led by UCSD's James Fowler and focused on 2,000 subjects from the National Longitudinal Study of Adolescent Health. Scientists matched the subjects' genetic information with "maps" of their social networks. According to researchers, they determined that people "with a specific variant of the DRD4 gene were more likely to be liberal as adults."

Posted by Jack Dikian online at 10:55 PM No comments: