No such thing as dragons 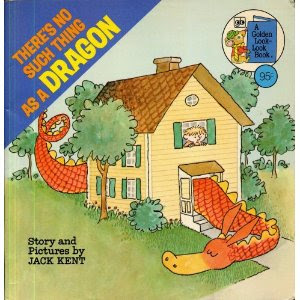 When Billy Bixbee finds a tiny dragon in his bedroom, his mum tells him, “There’s no such thing as a dragon!” This only makes the dragon get bigger. He grows, and grows, and grows, until he’s bigger than Billy’s house.

This is a charming little book with the text and playful illustrations by well-known author-illustrator Jack Kent. The story however delivers an important message practitioners would be well aware of - it demonstrates how a little attention can make a big difference, no matter what size the problem, not to mention the value of validation and acceptance.

As mentioned, Billy awakes one morning to find a dragon, the size of a kitten, on his bed. He pats the dragon on its head and its tail begins to wag. When Billy goes downstairs to tell his mum about the dragon, she yells, "There's no such thing as a dragon."

Billy returns to his room and ignores the dragon since there's no such thing. As Billy continues with his day, the dragon works very hard to make his presence known. It tries on Billy's pajamas, eats his breakfast, takes a nap and chases the bread truck. With great determination, Billy and his mum continue to ignore the dragon even though it has now grown from the size of a kitten to the size of the house. It's Billy who realizes that the dragon simply wants to be noticed and pats the dragon on the head.

This dragon reacts to this and starts to become smaller and once again the size of a kitten. With the dragon laying in mother's lap, she exclaims, "I don't mind dragons this size. Why did it have to grow so big?" To which Billy replies, "I'm not sure, but I think it just wanted to be noticed."