Apollo 13 and the human brain

Apollo 13 and the human brain.
I guess it’s no surprise that we know more about the workings of the human brain now then at any other time in history. A myriad of technologies help in this quest – consider for example computer axial tomography, structural magnetic resonance imaging, electroencephalography, and that’s to name a few. Then we have the knowledge gained through pharmacological function, neuropsychology, neurosurgery - you get the point.

So how does the story of Apollo 13 figure in our understanding of the brain? How are these connected? On April 13, 1970, two days after launch, an explosion caused by a fault in an oxygen tank disabled the Apollo spacecraft. Some of you know the story of Apollo 13 through the 1995 American film directed by Ron Howard and staring Tom Hanks and Kevin Bacon. 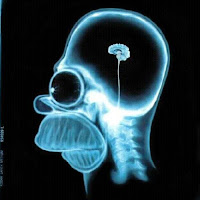 I watched a part of the movie again today, more to rest my head but in reality got me thinking, thus this blog. In a nutshell an explosion damages the service module, resulting in a loss of oxygen and electrical power. The crew use the Lunar Module as a “lifeboat” in space. The command module remains fully functional on its internal batteries, but they were needed for re-entry and landing so it was shut down shortly after the accident.

The fix came in the form of an ingenious combination of suit hoses, cardboard, socks, and plastic stowage bags - all held together with a liberal application of gray duct tape. As was usual whenever the Apollo team had to improvise, engineers and astronauts on the ground got busy devising ways around the problem and then checked out the new procedures.

Let’s know for a minute think about what sense an Archaeology team would make if they discovered Apollo 13 in a did some hundreds or thousands of years from now. You see, finding hoses, cardboard, plastic stowage bags, duct tape intermixed with other legitimate rocket components will be difficult to explain. There is no adaptive history, no context, no explanation for bric-a-brac.

Understanding the human brain, making sense of how it evolved, making meaning of the orbitofrontal cortex, for example, in sensory integration, in representing the affective value of re-enforcers, and in decision-making and expectation is extremely difficult. It’s difficult, in much the same ways, those archaeologists would find explaining Apollo 13 without the adaptive history.
Posted by Jack Dikian online at 5:50 AM