Psychology of time, A chain-reaction of electron-photon couplings

Back in September 2012 I wrote a book review (at Amazon) of one my favorite coming-of-age novels - The Merry Go Round in the Sea. In the novel a six-year-old boy, Rob comes to the realization that in his words “It will never be that minute again. It will never be today again.”

The concept of time has always been a recurrent matter for me. The notion of the passage of time, the arrow of time, our perception of time, our belief that times goes faster when we’re having fun, etc. And of course there is relativistic time, viz-a-viz Special Relativity.

Until the early 20th century when Einstein published his theory of Special Relativity our classical understanding of time was unambiguously framed within the fundamental structure of the universe, a dimension independent of events, in which events occur in sequence. This is sometimes referred to as a realist view. And unless when traveling at speeds approaching the speed of light (299,792,458 meters per second) the classical treatment of time is (have been) adequate.

Renormalization was first developed in QED to make sense of infinite integrals in perturbation theory. Although renormalization was first seen as a provisional procedure by some of its originators, it is now embraced as an important and self-consistent tool dealing with arising infinities associated with electron-photon couplings. 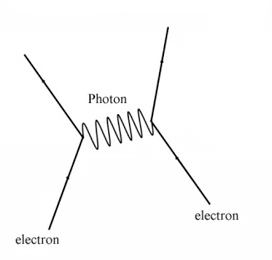 Is it possible that infinities arising at these couplings are due to a lack of a more generalised and fundamental understanding of time? If for example time is not regarded as a smooth continuous flow then there may be a process that creates new moments in time and moments of infinity.

What if each electron-photon coupling represents such moments in time? This then may in itself explain the generated infinities that require cancellation through the renormalization procedure. 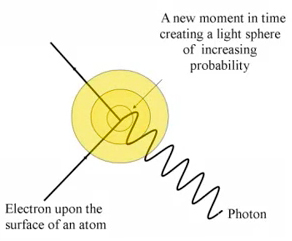 The idea is that from each electron-photon coupling Electro Magnetic Radiation radiates out in light spheres of quantized wave fronts until they come in contact with electrons on the surface of other atoms. At this point the wave function collapses into new quantum particles in the form of photons that will have their own position in time and space.

A quantum leap of energy creating new wave functions of future possibilities occurring in a continuous process (or stimulated emissions - in which an electron interacting with an electromagnetic wave of a certain frequency may drop to a lower energy level, transferring its energy to that field.) to generate a chain-reaction of electron-photon coupling. 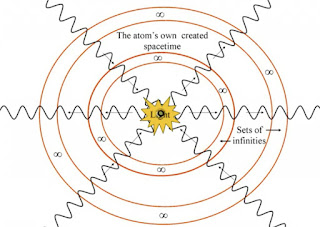 This chain-reaction of electron-photon coupling may provide the substrate on which our world-time is based. Our world-time might be a kind of left over of light emitted by an atom (now) that is absorbed by another (later on) creating the time continuum. The momentum of time (as we know it) may therefore be a function of light (seemingly continuous) that is radiating outwards from its centre source.

We can choose when and where to collapse this wave function giving us the perception of free will in creating our own future. However, the uncertainty principle (Heisenberg principle) will apply to the us in any future event. The quantum particle will only have a position and time in space when the wave particle collapses. If on the other hand we don’t observe – i.e we don’t collapse the wave particle function into a moment of time then the quantum particle will only have the momentum of its own wave particle function.

Put simply, to observe a quantum particle we have to create an electron-photon coupling thus collapsing the particle wave function into a new quantum particle in space, and importantly a new moment in time. This action forms our created space-time experience.

Posted by Jack Dikian online at 3:01 AM