Alexander Graham Bell's notebook entry of March 10, 1876, describes the first successful experiment with the telephone, during which he spoke through the instrument to his assistant, Thomas A. Watson, in the next room. Bell writes, "I then shouted into the mouthpiece the following sentence: Mr. Watson--come here--I want to see you.' To my delight he came and declared that he had heard and understood what I said.

And Stern (1994) "The telephone rings, it jingles our psyches, jangles our nerves.  We are seduced and soothed, rattled and betrayed by it.  Wherever it is-on the desk or street corner, the high seas or highway, in our bathrooms or briefcases-it has, for a machine, an allure like no other.” 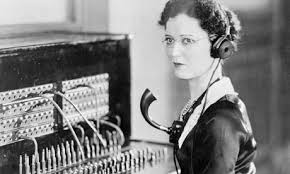 The telephone has become an integral part of our life, our society and psychology. In recent years, the home phone has almost become a thing of the past. A mere one-in-five people use their landline for making regular personal calls, with over half of the population keeping it solely for the purpose of accessing the Internet – meaning they pay for unused line rental, on top of their monthly broadband fee. Another poll found one in three people has given up on a home phone, rising to 48 per cent of those aged 18 to 34.

So whole generations grew up in a world of “the” home telephone. This influenced the way they communicated, the immediateness, the crackle of old telephone lines, and not to mention parents yelling at their kids. I need to use the phone.., I don’t like that boy calling you on the telephone, hang up the other line, you hang – no you hang up first, An entire social structure evolved around the home telephone.

Courtship was different then too. Many a love songs are written around the use of the telephone; they seemed far more innocent in their day (see examples below).

In the New York Times recently, reporter Alex Williams mourns “The End of Courtship.” Texting is to blame for dating’s demise. “Instead of dinner-and-a-movie, which seems as obsolete as a rotary phone,” young people today “rendezvous over phone texts, Facebook posts, instant messages.

I think he could have touched on sexting, as well.

Here some words from lyrics from the past. You may well know many of these songs.

Have you read any good telephone books lately?
If you ain't then let me recommend one
I've already read that Tulsa telephone book through
Tulsa Telephone Book, Tom T. Hall
1971

Mr. Telephone man
There's something wrong with my line
When I dial my baby's number
I get a click every time
Mr. Telephone Man 1981

The Portland water they swillin' cold
and it swills my body but not not my soul
Oh the call up to Portland on the public telephone.
The Portland Water, Neal Casal
2005

Feeling unknown
And you're all alone
Flesh and bone
By the telephone
Lift up the receiver
I'll make you a believer
Personal Jesus, Depeche Mode
1990

Hello operator i would like to place a call
to the pale grey telephone that is hanging on her wall
i know this sounds crazy but could you patch
Hello Operator, Headphones
2005

Friends or relations
On weekend vacations.
We won't have it known, dear,
That we own a telephone, dear;
Love Is Here to Stay, Bill Evans Trio