I watched the new Ridley Scott movie The Counselor last night – in fact I watched it twice and thoroughly enjoyed it right from the first few mystifying scenes. The story begins with a man, known only as "The Counselor" and his girlfriend lying in bed fooling around while somewhere else in Mexico, cocaine is being packaged in barrels and concealed in a sewage truck. 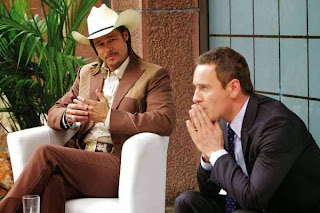 The plot basically deals with themes of greed, death, and the primal instincts of humans and their consequences. The film also uses strong imagery exhibiting a good versus evil, hunter versus prey, and crucially and what really captured my attention and imagination - the extra-moral Nietzschean and nihilistic tones. I hadn’t really heard much about the film and didn’t really know what to expect. But as the plot unfolded differences and contrasts between Nietzschean and Nihilism are conveyed in the dialogue.

Consider for example the scene after the Counselor’s girl friend is abducted he goes back to Mexico, hoping to find her. A package is slipped under the door of his hotel room. He opens it and finds a DVD with "Hola!" written on the side and the Counselor breaks down, heavily implying that the video is a snuff film of her from the cartel.

A desperate Counselor attempts to negotiate her freedom – an assumed [cartel] nonchalantly plays pool and talks on his mobile “…I can only tell you what I already told her friend, there is no one to talk to. I am afraid that there is no longer such a person. That is a thing of the past. I am afraid that there is no one to see…actions create consequences which produce new worlds and they are all different. Where the bodies are buried in the desert there is a certain world. Where the bodies are simply left to be found that is another. And all these worlds must of all been there, must it not? The world you seek to undo the mistake that you made is different from the world where the mistakes were made…”

So we have existential nihilism, which argues that life is without objective meaning, purpose, or intrinsic value. Morality does not inherently exist, and that any established moral values are abstractly contrived. Nihilism in some cases take a metaphysical forms, meaning respectively that, in some aspect, knowledge is not possible, or that reality does not actually exist. And Nietzsche arguing that truth is a sum of human relations which have been enhanced, transposed, and embellished poetically and rhetorically, and which after long use seem firm, canonical, and obligatory to a people: truths are illusions about which one has forgotten that this is what they are; metaphors which are worn out and without sensuous power.

Posted by Jack Dikian online at 12:47 AM