Could we be living in the White Queen's kingdom? 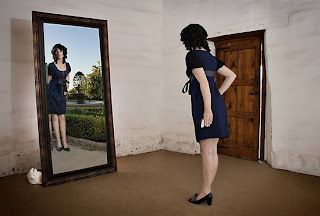 Lewis Carroll's Through the Looking Glass, the White Queen tells Alice that in her land, "memory works both ways." Not only can the Queen remember things from the past, but she also remembers "things that happened the week after next." Alice attempts to argue with the Queen, stating "I'm sure mine only works one way...I can't remember things before they happen." The Queen replies, "It's a poor sort of memory that only works backwards."

How much better would our lives be if we could live in the White Queen's kingdom, where our memory would work backwards and forewords? For instance, in such a world, you could take an exam and then study for it afterwards to make sure you performed well in the past.

Could we be living in the White Queen's kingdom?

Yoon-Ho Kim, R. et al,  reported in early 1999 an elaboration on a quantum eraser experiment (Quantum Eraser Delayed Choice) involving the concepts considered in Wheeler's delayed choice experiment. What was able to be gleaned from this experiment is interrupted by many as evidence for backward causation.

At the same time research from a different domian  may be indicating that our brain has the ability to not only reflect on past experiences, but also anticipate future experiences. This ability for the brain to "see into the future" is often referred to as psi phenomena.

Dr. Bem, a social psychologist at Cornell University, conducted a series of studies that will soon be published in Journal of Personality and Social Psychology. One such experiment involves recalling a list of given words.

We know that rehearsing a set of words makes them easier to recall in the future, but what if the rehearsal occurs after the recall? In one of the studies, college students were given a list of words and after reading the list, were given a surprise recall test to see how many words they remembered.

Posted by Jack Dikian online at 12:41 AM