Speed of the Human Brain 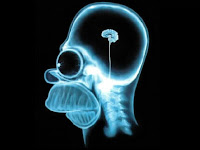 Whilst pondering over time dilatation and relativistic effects of motion, it occurred to me to ask what if someone amongst us had a brain/mind that operates at a faster rate. I’m not talking about someone with a high IQ, or someone with a quick wit, rather, an individual whose “time base” (a clock that forms the time base for biological and physiological processes) runs at a significantly faster rate than seen in humans. My initial thought was: does this individual perceive the world to be flowing in a slower motion.

The first thing I needed to understand is what provides our time base. Sure, we have a "body clock", the "circadian rhythm" a self-regulating biological timekeeper. The suprachiasmatic nucleus (SCN), a tiny cluster of nerve cells in an area of the brain known as the hypothalamus.

This body clock helps regulate breathing and heart rate, body temperature, blood pressure, hormone production, and other vital bodily functions. Our bodies know what time it is by constantly measuring the concentration of a protein called PER in the body.

Buildup of PER, it is thought, slows down a mammal's internal clock, causing it to have longer days. Next I wanted to consider the speed of the human brain compute.

This can be estimated by looking at 3 main variables

A human being has about 100 billion brain cells. Although different neurons fire at different speeds, as a rough estimate it is reasonable to estimate that a neuron can fire about once every 5 milliseconds, or about 200 times a second. The number of cells each neuron is connected to also varies, but as a rough estimate it is reasonable to say that each neuron connects to 1000 other neurons- so every time a neuron fires, about 1000 other neurons get information about that firing. If we multiply all this out we get 100 billion neurons X 200 firings per second X 1000 connections per firing or

Posted by Jack Dikian online at 2:25 AM