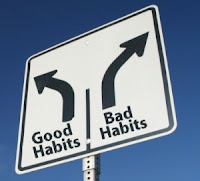 New Year’s Resolutions
Does our brain sabotage our efforts

We all know that habits are hard to break – specially the bad ones. It can be said that the bulk of our learning and behaviours is a consequence of earlier behaviours that we found beneficial, rewarding, and / or pleasant. And even when we want to break a habit, we are more likely to identify an alternative behaviour to replace the one we wish to avoid. Some unhealthy behaviours become ingrained and we fight against the power of immediate rewards. Think chocolates and vegetables - Chocolates will trump veggies, more generally, the immediate gratification we receive from eating a chocolate bar greatly outweighs the longer term benefits of eating all of our greens.

There is hard-wiring in our brains that preferences immediate reward as opposed to a delayed outcome. A neurotransmitter, Dopamine is involved in turning that happiness into a habit. It helps condition the brain to want that reward again and again — reinforcing the connection each time — especially when it gets the right cue from the environment. And so, we tend to overestimate our ability to resist temptations, thus undermining attempts to avoid bad habits.

In an experiment, psychologist Loran Nordgren, an assistant professor at Northwestern University's Kellogg School of Management, he measured whether heavy smokers could watch a film that romanticizes the habit — called "Coffee and Cigarettes" — without taking a puff. Upping the ante, they'd be paid according to their level of temptation: Could they hold an unlit cigarette while watching? Keep the pack on the table? Or did they need to leave the pack in another room?

Smokers who'd predicted they could resist a lot of temptation tended to hold the unlit cigarette — and were more likely to light up than those who knew better than to hang onto the pack, says Nordgren. He now is beginning to study how recovering drug addicts deal with real-world temptations.

Much more insidious
But temptation is much more insidious than the closeness of the cigarettes or that irestable snack. By eating that snack whilst watching our favourite TV show - a dopamine-rich part of the brain named (the striatum) memorizes rituals and routines that are linked to getting a particular reward. Over time, those environmental cues trigger the striatum to make some behaviours (like having those snakes) almost automatic.
Posted by Jack Dikian online at 7:28 PM