Tom and Jerry - no more fear

Fear is induced by a perceived threat which causes entities to quickly pull far away from it and usually hide. It is a basic survival mechanism occurring in response to a specific stimulus, such as pain or the threat of danger. 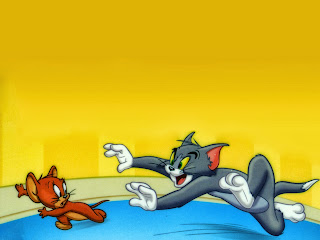 Now a study at the University of California, Berkeley shows that mice may permanently shed their fear of felines when infected with a protozoan parasite Toxoplasma gondii.

The parasite can infect most mammals, including humans but can only reproduce in the feline gut, so cats need to eat animals infected with T. gondii to keep the parasite generations going.

Perhaps increasing the likelihood that it will wind up in the belly of a cat, the parasite makes infected rodents lose their innate aversion to cat urine, researchers discovered in 2000. The parasite strain was so potent that it killed the mice quickly, so researchers had no way of knowing whether the rodents’ loss of cat aversion could persist.

According to the researchers a transient infection with the parasite may permanently alter the way the rodents’ brains perceive predator threats.
Posted by Jack Dikian online at 5:34 PM